This week I have been going back to Ironman Copenhagen. I am still reflecting on it, still trying to understand it, understand what happened here. The title of this entry should give you a hint that it did not go as planned and I had troubles with it. However, understanding those troubles and how did they come up to the surface – that is quite a puzzle.

Other than that, this week was lining itself up to be quite an exciting one. I have got a lot of new gear ordered coming in for my 2018 season and training through the end-season. I have had a few calls and chats with potential coaches for my 2018. And finally, me and Dovile will be participating in a local Lithuanian even with Olympic and Sprint distances accordingly. So I found this week exciting and a lot is happening, even though it is the end of the season.

Me, Dovile and our friends – Andrius, Asta, Adomas and Vytis day before the last event in Lithuanian Triathlon Cup at Druskininkai.

However, now we need to go back in time and continue with the swim turnaround at the mid-mark of the swim-leg in Ironman Copenhagen.

The first half of the swim was promising me a great day. Weather was much better than a day before, the swim was going quite smoothly and I felt confident, I felt this will be the day I might break 10 hours on Iron-distance course. Then I received my first hit of the day, as I was going into the turn back.

At the turnaround, we all had to start swimming against the current, against the waves – both of which were caused by the wind. And I had my goggle filled with water. The sun has started setting itself at the horizon, which meant direct sunlight to my left. With left watery goggle and sun set – I suddenly am unable to breathe in to my left side. This breaks my rhythm, breaks my form and now I have to try to adjust sighting. As I trained to sight on every 4th breath after my left side. Now these tries were concluded with me gulping a lot of water. At first I tried to laugh and smile a bit about it – thinking that I might not need the electrolyte drink afterwards, as I will drink quite some salty water. But apparently, there is a benchmark for how much water you can drink during the swim, before it stops being a fun activity. I managed to reach that benchmark too fast for my liking. And this just stacked up the stress I was feeling after the turnaround. My left foot started to cramp up a bit, more and more people were jumping over me, a lot of new athletes coming in at faster speeds, I can not see properly where to swim and my breathing pattern is completely broken. I do my best to keep my composure intact. I re-plan my breathing, I start to think about new sighting pattern, which I use last year and… I get a vast shock, an unpleasant explosion in my chest and without understanding what happened – I come to a full stop. This takes a lot of words to explain and it might seem like an incident, which is prolonged, but in the water, during the swim, it happened so fast. I did not understand it at first. It seems that someone from the following group of swimmers, did the same mistake I did before and swam into opposing lane. Unfortunately, he did not notice it in time and swam into me. We hit each other like two knights, during their duel on horses with spears, making each other to stop completely and reevaluate what has just happened.

Today, I am still in shock and completely baffled by what happened. This was my first accident of this type during my 4 years at triathlon. I have mentioned it to both of the coaches I spoke to, during this week – they were surprised by such accident as well. Let us hope that this is the last one as well!

That hit completely throws me out of my mental game, I become scared and overly cautious of what is happening around. Now I am even more lost than before – I have no clue where I am, if I am swimming in the right direction, according to buoys, I am trying to dodge the incoming hits, as if I were a boxer and people coming in, who were supposed to swim slower than me according to their own speed, are coming over me in bigger and bigger waves.  This takes me completely off guard and out of nowhere, the stress level rises to a level, I have not experienced before during the races. Now I am extremely angry already, I start to hate the swim, I start to be annoyed by all that underwater grass, which I am completely covered in. Some of it covers my left leg, which already is cramping and every time I try to shake it off, the leg warns me that it will cramp. So I switch my left leg completely and hope that it will glide away from my foot. At this point, I feel like a Navy S.E.A.L, which goes undercover to some secret operation and has to cover himself in all the mud and grass, not to be spotted.

Panicking within myself, I fall completely out of my rhythm and I never find it. I can see the last turn. It is almost over. I try to pick myself up, congratulate myself and be happy that I have done it. Now I can bike and show what I have got. Due to my sighting problem and trying to avoid hits from other people, I take a wrong trajectory for the exit and ultimately get blocked by a raft with a referee. He says I have to go much more to the right. Newly built up composure gets broken into small pieces, shattered under the water and I leave it, releasing an angry voice under the water. I had not expected this. All this, creates the angriest self, I have ever been during any race.

Dovile has been waiting for me so much and she was so happy to see me, to congratulate me, to ask how do I feel. This freshly created angry-me is in such a tunnel vision, he does not notice all that and vents it all out, all that pain from the hit face to face, all the freight during the second half of the swim, all the frustration on Dovile. I tell her so angrily, how I hated it, how difficult it was. I try to stop myself, I do not want to be this angry, I do not want to hurt her with my words. I stop for a few seconds and I start again. I completely lost control over this anger. After the second iteration of the venting, I manage to stop, too late and unable to mend anything.

Me, out of the swim. Venting all the pain to Dovile. If only all this anger and negative energy was channeled somewhere else.

I quickly take off my swim-suit, focus on getting to the bike and run to the mounting zone, where I can legally start my bike leg. I pedal easily, try to get into my shoes, 180 kilometers to go, I want to make it to a new beginning. I know I can do a lot on the bike, I start trying. With this burden of anger clipping in on to me, I take off.

Going out into the loops, to the outside of Copenhagen is not as easy – you have to do some sharp turns, you go through a lot of main streets of the city. There are a lot of people who exited the swim before me, who are slower on the bike, I start taking them over. While becoming faster and passing people, I “absorb” the potholes of the city with my shoulders.

After multiple hits, I get to a point, where I decide not to be in the aero position and cycle carefully through the city, until the long straight by the coastline. I hope there I will be able to relax and comfortably do it.

First sharper turn and I can see there is a man lying on the grass already with official next to him, his bike seemed to be broken as well. “That was super unlucky to him”, I think. I am hopeful and happy that he himself looked well. I try to be even more careful, until I am out of the main streets.

Half an hour later, I get to a point, where I can lean over the bike and push it to bigger speeds. 36-37 km/h, going through the outskirts of Copenhagen, passing people through I start to hurt in my shoulders very bad. It reminds me of the pain, which I had, when I was not biking with my time-trial bike enough and my shoulders were not used to the position. Now it is different, now I have been training, doing 4-5 hour rides in this bike, in this position. This can not be happening. Pothole. Sewer cap. Every absorption of road’s rough sections is becoming so painful. I start to go out of the aero position more and more often, just to soothe the pain, just to not have this psychological and physical burden on my shoulders. First hour flies by, I am doing worse than I was planning to and I this distress in my back is breaking me. I am at 40 kilometer mark. 140 to go and I realize that today is not going to be my day. Today will cause me severe emotional and physical sabotage on me. This is where we turn into “outside outside” of Copenhagen. The road becomes rougher, it is not straight anymore, we go through hills, small sharp turns, through farms. We are exposed to the winds and forests: 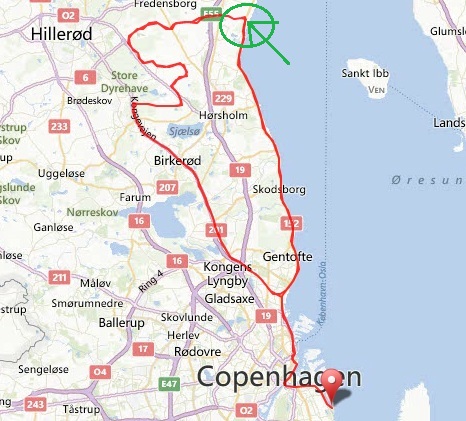 At that very turn, I get a acquaintance . I am now being accompanied by my new self, who is still hurting from the swim, who is unhappy, who is shameless and who wants to quit. I start biking with this thought process, which wants me to quit at the first loop. To tell Dovile that I can not handle this. To go home, rest, to confirm that nothing is going as I planned and I do not want to play by other rules. And now I start a relentless battle, monologue with these intentions, temptations and desires to quit.

My previous readers remember that I stopped reading Agassi’s book, due to it making me feel a bit down and depressed of the sport itself. I returned to the book after the Ironman and funny thing happened – I was about 5 pages away from reading his amazing return to the big sport, to his best form and becoming this amazing athlete he is now known for. 5 pages were separating me from finding motivation and discovering how he battled through the negativity. I keep asking myself now, if I had read through it prior to the Ironman – would the outcome be different?

This site uses Akismet to reduce spam. Learn how your comment data is processed.

Eventful day in gravel and forest, resulting in almost 100km around beautiful lakes in Moletai with friends. Thank you for the shared time @arnasusavicius @tomaspetrasrupsys, thanks organizers Ghost Monks.