I will try to wrap quickly again. This time it is due to the fact there is not much internet connection at the place we stay in Gran Canaria. So it is difficult to catch some internet and have a blog posted. However, I will definitely definitely make it up for the last few wraps in the next two weeks. So far Gran Canaria is exceeding my expectations on whole new level and I am yet to travel to the training camp. Excitement to full extent!

Sometimes it is just difficult to arrange travels and training, other days – it seems to go smoothly and easily. Last week had its difficulties, mishaps and even a missed session. Trying to be a good pupil – I aim to do all the sessions that my coach planned for me and not skip any of them, nevermind how difficult it is. Sometimes though, it does not happen and my best bet is to find peace in it.

As you have already figured it out – I was travelling last week. To Denmark, to have some meetings with my team in Denmark, have some performance reviews and discuss approaches to specific projects. The week itself started with amount of sleep I would not evaluate as a “positive” amount. A very early morning flight to Denmark, whole day at work and to the hotel. Training sessions seemed to be rather simple and easy to accomplish, but coming out of the weekend and sleepless night – even an endurance run seemed like it could break my legs and muscles were being torn apart. On top of all that – a day, when I was supposed to have a run and a swim session – I figured out that out of all my swim gear, I packed only swim shorts. Goggles and swim cap was left at home. At that point, I tried to come up with a masterplan to either buy goggles and cap at the sports centre or borrow them somehow, somewhere from someone. I ended up however with accepting my failure and the fact that this week I will have a training session, which was not done solely because of myself. After that was clearly carved out in my mind, I proceeded with the week onwards and it was rather successful one, despite the mishaps!

After coming back home from the business trip, I had one last demon to hunt – it was a Functional Threshold Power session on a bike. It can be described as a test we used to have at school, universities etc.. It is a test, where you challenge your accomplishments from your previous sessions, by an “all out” session, where you try to do your best within given time limit.

I have never liked tests at schools, universities. I always stressed myself out before, during and after them. Fearing that outcome would not reach my expectations and that my work beforehand would be diminished by the numbers, which come up after the test. Eventhough the tests are aimed at checking my threshold and determining the point, if I can push my body a tiny bit further, I still have a dredge for them.

The FTP test was supposed to be done in the afternoon, right after my trip home from Denmark and before I depart to Gran Canaria. In general, the few weeks before and especially the week in Denmark I struggled to keep my food intakes at the desired level and usefulness (read “I have started drinking alcohol far too often and my sweet teeth have gone berserk with sugar cravings”). Due to that, I was even more afraid of failing the test and neglecting my previous training build-up because of that. This was going on in my mind throughout the trip back home and while I was setting up the turbo trainer.

Luckily, my body felt like taking over and not listening to the mind. Once on the trainer, I kept the energy and power at much higher levels than previously and was not uncomfortable at keeping it up that high. 10 minutes into the hardest part of the test, I still felt fresh and capable to achieve more and I just kept at it. It was a great feeling and the outcome definitely surprised and pleased me.

Previous FTP test ended up with me pushing out 265 average watts for a 20 minute all-out interval on the bike. That put me at 3.4 watts per kilogram, which places me in the very middle of “Moderate Cyclists” category. I have never been a good cyclist, nor I have a lot of experience in it, however being in the middle of middle – did not channel too much happiness to my ego. During the test last week however, I managed to comfortably push out 299 average watts for the same interval session and that upped me to 3.9 watts per kilogram and put me on the verge between higher quartile of “Moderate” and lower quartile of “Good” cyclist. This tickled me in the right places and my self-worth has increased.

In addition to that, there was only 2 months of indoor sessions on the bike, which resulted in pretty noticeable gains for the FTP. That gave me even greener light that there is more potential to push my body forward and to increase my power on the bicycle. Now all I need to, is to focus on eating less sugars and reducing alcohol intake. That, combined with my camp in Lanzarote, which is pretty much focused around cycling – should put me even higher up the ladder.

The week ends up with a trip to Gran Canaria for a week of vacations with my wife, before going to Lanzarote. We left Lithuania in strongest winter’s grasp yet, for this year. This trip allowed us to dodge the biggest negative temperatures to enjoy complete “180 degrees” turn in the positive direction:

This trip, as well, has proven to me that Dovile is my biggest supporter and catalyst, in terms of my sport achievements. Even during our vacation – she assisted me and gave her very best help, so my training sessions could be completed. Thanks to her, I have had a pleasure to do my long run in the sunny weather of Canary islands on Saturday. It was such a great change of everything, especially considering that my last two long runs in Vilnius were done either during unpleasant cold or a snowstorm. In addition to that, she helped me out, when I was searching for a bike rental spot and gave me the support of “Tour de France” level, before and during my bike ride into the mountains. I am very lucky! 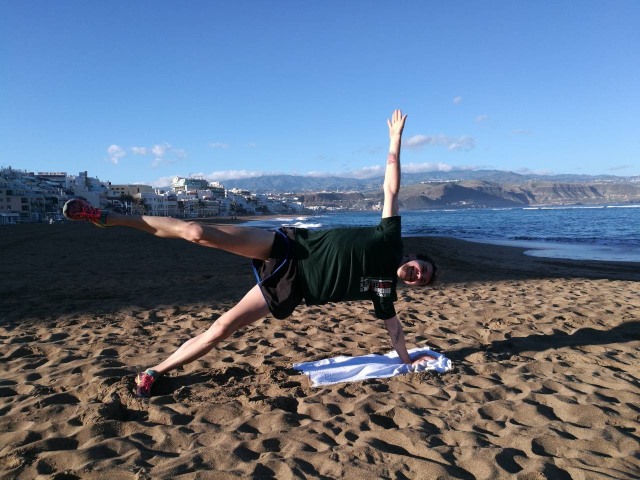 I think I have not stopped exclaiming for the past few days, how awesome it is to be here in Las Palmas. The weather was extremely generous to us. The nature around is stunning and the city we live in is wonderful. I can not wait to share more from this trip with you. So stay tuned!

This site uses Akismet to reduce spam. Learn how your comment data is processed.